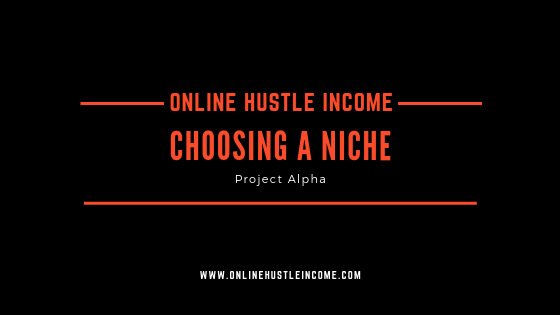 This week, I’ve spent my time on choosing a niche. I’ve been looking for a niche that can use affiliate commissions as a revenue model. However, other revenue models like ads, lead generation, ebooks and maybe even dropshipping are always a plus as well.

A webshop however, is not an option. It would require too much time. Following up on orders, pack and send packages, … are things I don’t want to spend time on. Even dropshipping is something I’d rather avoid. I don’t like the idea I would have to answer customer questions at every hour of the day.

I’d like to keep my schedule as flexible as possible. With a full-time job, the flexibility of my schedule is limited anyway. So on some days, I just want to be able to disconnect from the internet without having to worry about orders and stuff like that.

I don’t have to be personally interested in the niche I’ll choose. I’ve started quite some other projects in niches that don’t interest me either and I never really minded. Of course it’s more fun to write content about something you’re interested in. But in the end, the fun part for me is ranking and cashing 😉

Something I considered important in choosing the right niche, is it would have to be one with enough potential to expand even further after the first year. That’s why I decided to choose a rather big niche and to focus first on a subniche. Once the subniche gets some traction, I can expand the website with another subniche.

When choosing a niche I’ve also looked (only a little) to the search volume of the potential subniches.

Competition is important as well. Even though I do believe there’s still plenty of opportunities in most niches in Belgium and the Netherlands as long as you are specific enough and start focussing on long-tail keywords.

At last, it’s also important that there are enough advertisers who are willing to pay commission when I get them sales. The amount of affiliate offers is definitely something to take into consideration as well.

Eventually, I’ve found a niche that ticks all of the above boxes. I’m really excited to get started with this project. Even though the niche is a rather risky choice as there is quite some hard competition. But hard competition also means nice revenue in most cases.