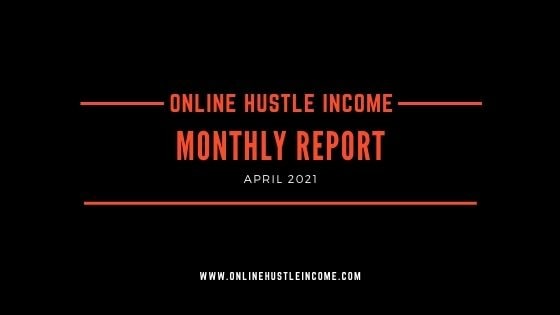 April has come to an end so time for a new monthly report. Unlike previous months, I actually did some work for Project Alpha. For Project Beta I haven’t done anything. But I have been preparing some things for a linkbuilding campaign that will benefit both projects.

April is typically a low-season month for both projects and I don’t expect any of the projects to make a lot of sales again until September or something.

For Project Alpha, I managed to publish 2 content pieces. The lead magnet however doesn’t seem to be getting any leads. I’m assuming the lead magnet title just isn’t enticing enough and not what my visitors are looking for. I deleted the pop-up however and made a page for the lead magnet and made a link to that page from the navigation menu. I’ve already inserted some CTA’s on some pages. I’ll definitely have to put more work in making this lead-magnet actually attract leads and grow the email list. So far only 1 person has downloaded the lead magnet and that person immediately unsubscribed (even though I don’t have any sequences set up yet).

I did 1 guest post but that link hasn’t been picked up by Ahrefs just yet but has already been indexed in Google. I’m preparing some tiered linkbuilding campaign so in the next few months, the amount of referring domains should definitely go up.

No big changes in terms of rankings. I plan to set up some campaigns in serprobot to track some important keywords more closely. I’m not that big of a fan of the built-in rank tracker of Ahrefs and serprobot is quite cheap so I might just take a subscription for some extra bots for Project Alpha.

Organic traffic has been down just a little bit but nothing to worry about. If I keep these rankings during high-season months, traffic would be much higher.

Revenue is definitely down and not at the level it should be at all. At the end of April I changed to another affiliate program for the links of 2 specific pages that are getting a lot of traffic. The original affiliate program was converting at an average of 0,35% and for the first few days of May, I’m already seeing a huge increase in earnings. After 6 days I’m already over the revenue I made in the whole month April so that’s a big win.

For Project Beta, not much has been done. No new content has been added and no linkbuilding has been done. Revenue has made a huge dip as well given the fact that these low-season months are just barely making me any revenue.

The email list now has about 780 contacts so that list just keeps growing a bit. Once I hit the 1000 contacts, I definitely should do something with it and try to monetize the list.

No links have been built for Project Beta. The links I acquired organically in May are still there. This project is now over a year old so I might definitely want to build more links and at higher velocity as well.

I got a little bump at the end of March / beginning of May regarding organic keywords. If I manage to keep these rankings or even acquire some better ranks which obviously is the goal, I might expect some nice traffic during winter months.

Organic traffic is down, just like Project Alpha. Nothing I’m worried about though given the fact that my rankings are still going up.

Well, revenue is going down for sure. Even though I still have quite a lot of traffic (relatively for this niche) and rankings, these are just not the months that people are buying the things in my niche. I did hope to stay above the €300/month revenue though.

That’s it for this month!