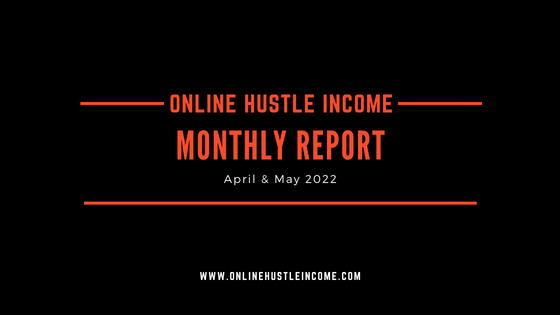 Long, long overdue for a new monthly report. In recent months, I went back to Thailand where I still am now and found a bit of a routine again in my day-to-day life. That daily routine sure helps me to get more work done but it took me some time to really get settled (with the visa, finding a rental house, buying everything that I’d need for in the house…). Anyway, here we are again.

In May we had another Google Core Update and it seems like it was pretty hefty one. I saw a lot of volatility in the serps. I have a few sites that got hit pretty bad, some others (like Project Alpha) that had some volatility but came back to about the same traffic level like before.

All in all, the update didn’t work in my favour when I look at overall traffic and more importantly – revenue over my full portfolio of sites. So let’s dive in the number for Project Alpha and project Beta for the months of April & May.

In April & May we had a break in uploading articles. However, in April, we still managed to publish 36 articles and in May only 7. That puts us a nearly 260 articles published on the project in total.

In June, quite some new articles will get published as well. However, after that, we’ll probably have a break in publishing new articles for a while as I expected and was hoping for better results than what we are having right now.

I’m convinced that there’s a lot of other work that has to be done for this project. Internal links, creating decent silo structures, optimizing some pieces of the content … rethinking the navigation menu and some design things.

The reason that we had a break in uploading new articles in April & May was that I had 2 lead magnets written. So these have to be implemented in the project as welll and I would have to set up some automated email marketing with ActiveCampaign.

No new links have been built. I might build a few coming months but don’t intend to go very hard on the linkbuilding part.

I lost 2 positions on 1 one the most important keywords for Project Alpha in terms of revenue. Going from position 2 to position 4 definitely is no good sign. So that’s definitely something to keep following up closely.

When looking at the organic traffic, both April and May were ok. Better than february and march but not as good as I was hoping for. I guess I’ll have to have some patience here + work a bit more on the silo structure and internal links.

Well April was a really good month in terms of revenue. Unfortunately May was a lot less but a bit to be expected. I expect the summer months to generate less revenue anyway. Once summer is over, revenue should go up once again. So it makes sense to me that these days, the revenue/session is lower than in winter months.

I’m happy with where the average revenue of the last 12 months is going. Taking the last 12 months in account, we have an average monthly revenue of over € 2.000. The last 3 months average revenue is at about € 2.750. That means with a conservative multiple of 25x, the market value of this project should be something between € 50.000 and €68.000. I’m going to keep the website for now but knowing that I could sell for a price like this is nice to know.

Since nothing exciting has been happening for Project Beta anymore, I’m not going to report on it any longer. Every now and then, a sale happens and the whole project is making maybe €20 – €30 per month. Enough to cover the hosting costs and that’s it.

Traffic is slightly down since the beginning of the year. Compared to last year, traffic is down by quite a lot.

So I consider this a dead project that I’ll just let age for a while until I want to pick it up and revive it again.