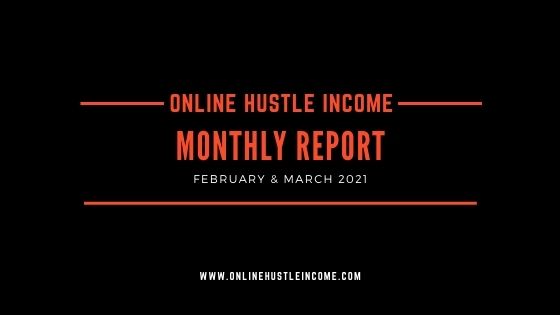 Oops, I skipped a month of the monthly reports. Well, February was a short month anyway.

In the past two months I had my hands full with 5 of my websites that got hacked because of a vulnerability in one of the Thrive Themes plugins. I successfully managed to recover 4 of the 5 websites with backups. But 1 of the 5 sites, the most important one, had to be rebuilt from scratch.

That definitely taught me a lesson to take more care of the security of my websites and make sure every theme and plugin is up to date at all times. I’m slowly implementing security plugins at every site and added almost all my sites to managewp.com so I can update all the themes and plugins of all my sites from 1 dashboard. This tool also keeps a monthly backup. All this for free. There are some paid add-ons like more backups, cloning sites etc but the free version will do for me now.

Anyway, let’s dive in the reports for Project Alpha and Project Beta.

For project Alpha, not much has been done at first sight even though I think I made quite some progress behind the scenes. Only 1 piece of content has been uploaded but a lead magnet has been added. And I have put quite a lot of effort in the lead magnet. It’s an ebook with about 20 pages of content.

Next to the lead magnet creation itself, I have also set up the Mailchimp account and a pop up on the site. All of this is only live for a few days and so for nobody has downloaded the lead magnet yet.

So in the coming months I might look for a way to optimize all this by adding CTA’s in-content and consider removing the pop-up.

I haven’t done any active linkbuilding but as you can see in the graph above, I got some natural links from directories end March/beginning April.

The Domain Rating by Ahrefs is still very low though and actually declining. Right now I have a Domain Rating of 3,3. I might want to add some high quality links to the link profile to get this up a bit. But then again, Domain Rating is just a metric that doesn’t say anything about the value of a website, right?

Rankings have been stable. No clear incline but no decline neither. And given the fact that this project didn’t get that much attention in the last few months, that’s not that bad.

As expected, after January, which is the most important month for this project, organic traffic declined a bit. Still quite happy with the traffic and I’m not that worried about it. I just really hope to have some more time in the coming months for this project so this can keep going up 😉

Now, February definitely wasn’t a good month. Even though I might have f*cked up a bit in my own tracking and some of the revenue from Project Beta might actually have to allocated to Project Alpha. Most likely, the actual revenue was more like in the € 400 range like the months before and in March. But even with these numbers, the Last 6 Months average revenue is still € 350. With a multiplier of about 25, this websites is worth €8.750 if I would put it up for sale. And the multiplier could easily be more. Obviously, I will not be selling this project for this amount. I’d rather grow this website way bigger.

For Project Beta, not much has been done at all. I uploaded 1 new article and that’s it.

My list from the lead magnet is growing nice though. Right now, I have an emailing list of about 725 emailaddresses. About 650 of them are actually subscribed while the other have unsubscribed by now.

For a niche site like this, that is quite a nice list though. So I might consider doing something with this someday. I’m thinking about maybe an email blast before Black Friday with some decent upsells or something. We’ll see.

Just like Project Alpha, I’ve acquired a few natural links since I haven’t done any linkbuilding for this project. Which makes it a little bit weird coincidence that both sites acquired the same type of directory links in the same timeframe. Then again, I’m not going to complain about it.

The amount of organic keywords have been steady. Nothing much to say about that here. No active linkbuilding and barely any new content so this was to be expected.

Again, as expected, organic traffic is down a bit. Just like project alpha, january definitely is the top month for this niche. So I expect a little bit of an incline in the coming months.

One of the things I would like to do over the coming months is getting more traffic to the homepage. For this, I will be doing some on-page optimisations for the homepage and build some extra links. Getting the main keyword for this site only 2 spots up in Google, will make a huge difference in organic traffic.

As I said in the part of Project Alpha, I think some revenue of February should be allocated to Project Alpha. But even then, February was still a great month in term of revenue. Also for the month March, I’m quite happy with the revenue.

Right now, this website has a last 6 month average revenue of € 780. Let’s take 25 as the multiplier for the sale value. Then this website would be worth €19.500

So that’s it for this report. Hope to see you guys next month!