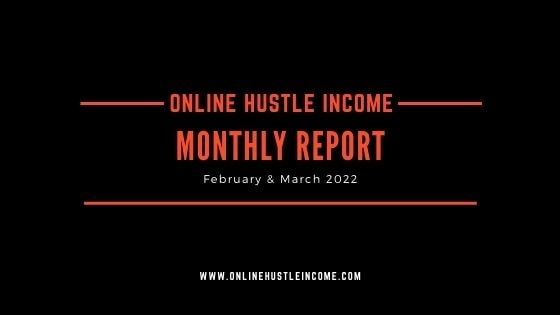 Since February only has 28 days, and I was rather busy with client work & travelling, I skipped to monthly report of February. So in this report, we’ll go over the things that happened in February as well as March.

During these two months, I came back from Thailand to Belgium, made a trip to Bulgaria and back to set up a new business there and I have spent most of my time doing client work instead of working on my own sites.

Fortunately, I have 3 people working part-time on these websites to make sure content gets written and published.

That being said, let’s dive in to the projects.

During February and March, my writers have been busy writing new content. But I also gave one of the writers the task to upload the content. He did a good job but now it’s still my responsibility to double check these articles, add some internal links, add affiliate links where appropriate etc.

And with all my client work and travelling, I have been lacking the time to do this properly.

At the moment my writers are working on a lead-gen download. My intention is to publish these ebooks and capture email addresses in return for the free ebooks. Doing this, I can start leveraging email marketing/marketing automation.

In the long run, it’s still my goal to create a paid infoproduct (probably an ebook). With an email list, that would be my first group of potential customers.

Nothing really has been done with regards to direct linkbuilding. Only a few tier 2 links have been built but on a very small scale. I don’t expect these tier 2 links to immediately make a big difference.

Rankings went up a bit in February. But it seems like porject alpha got slightly hit by the product review update by Google in March. No huge setbacks though, but I did notice in my rank tracker some positions on product names that were lost.

In the end, quite some new articles have been published.

While the revenue numbers for February and March might seem (a lot) less than January, I’m still very happy with these number. I consider January as an extraordinary month and compare number more with the months before.

February with only 28 days still had very decent revenue with an average of €100/day. March was a bit less and I expect the coming months to have even less revenue.

With numbers like these, I’m definitely thinking about a potential exit for this project. Even though, this project could grow much much further, €80.000 is a lot of money.

Nothing has been done for Project Beta. Compare with previous year, we have less traffic but affiliate clicks are super low. I’ve been saying this for months but I really should give this project just a little bit of attention and take a look at all the affiliate links because I must have done something wrong a while back.

This project seems to be hit a bit by the google product review update as well by the way.