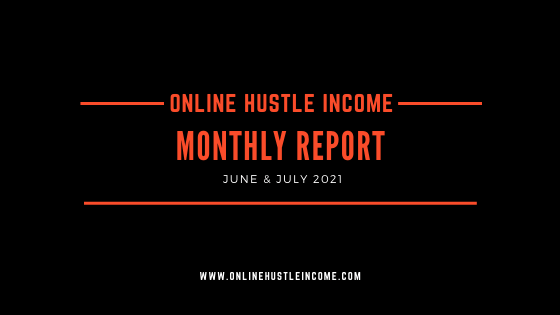 I skipped a month with the monthly reports… Oops. Reason for this is that I have been quite sick (not covid) at the beginning of July causing me to be unable to work for about 1,5 week. Then I had to catch up on some work and do everything that was needed to travel back from Thailand to Belgium. And with this whole pandemic situation, that isn’t as easy as it normally is.

Either way, I’m back in Belgium for now to get my vaccine and will probably go to Bulgaria or Portugal after my second jab.

Not much has been done in June & July in general for Project Alpha. Not in terms of new content and not in terms of linkbuilding neither.

I built a few extra guestpost in June but didn’t do much more than that. A few more links got indexed by Ahrefs that were actually built before. Project Alpha also lost a few links in July but these were mainly (spammy) links that were natural and I never bothered about anyway.

In terms of rankings, I lost quite a bit of rankings in June that as I believe was the result of the algorithm update by Google. However, in July, almost all of these recovered. So nothing special to see here. I am going to keep an eye on the top 3 rankings however as it seems that I’m losing a bit on these positions.

Traffic is nothing unusual for these summer months. I expect to see more growth (instead of decline) once summer is over and we’re heading towards the end of the year. Winter months are just way better for the niche(s) this website is in.

Changing affiliate programs in May has been a great thing to do for this project. Even though rankings and/or traffic aren’t growing, the revenue is still going up good. We’re slowly getting towards the €2.000/month mark. Even though I expect August to be worse than previous months, I do expect to hit close to €3.000/month in December as long as rankings and traffic don’t get hit (too hard).

Just like for Project Alpha, not much has been done for Project Beta. No new content published and barely any linkbuilding done so not much to report about besides some numbers.

Just like for Project Alpha, there were a few guest post established in June but not much at all. Some links that have been established in previous months got picked up by Ahrefs in June & July. All in all, this site still has a relative low number of referring domains.

A lot of extra keywords were ranking on page 2+ in June but also rankings on first page and top-3 positions went up. In July however, it got hit (just a little) bit but still acceptable. Compared to last year, there are way more keywords that are ranking. So in terms of traffic and revenue, winter months should be great.

Traffic is low during summer months. Nothing I’m worried about too much. Winter months will definitely be better again.

Kind of as expected, June was a month with really revenue. July also wasn’t great but definitely better than the 3 previous months. I don’t expect big revenue in August neither. In September, sales might slightly go up but it’s not until October that things are getting interesting.

That’s it for this report. I’m quite happy with the results of both projects. I definitely have to give both projects more love but I’m convinced that in the coming 2 months, I’ll barely have any time to spend on these projects. That’s a bit of a shame since this is the perfect time to prepare both sites for the winter months.