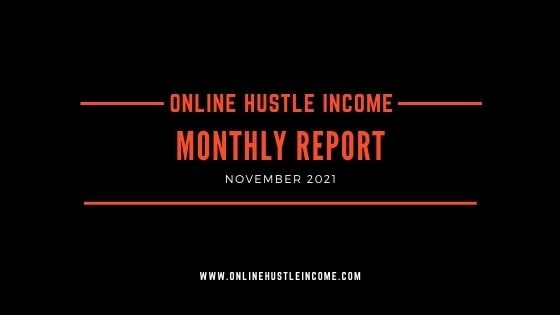 November is over and it’s starting to get really cold here in Belgium. I’m already looking forward to going back to Thailand in January and enjoy better temperatures.

November was an okay month. Not great in terms of overall revenue though. With Black Friday and shopping spree’s for the holiday season, one can usually expect a great uplift in sales. Since most of my sites got hit with an algorithm update and I explained in last month’s report that I’m not going to bother trying to fix it and just focus on Project Alpha, I probably left a good chunk of money on the table.

Either way, I’m still doing some freelance work but less than in September and October. As of January, I might get more occupied with freelance work again since there are some projects in the pipeline.

Even though overall revenue might have been less, I am happy with the work that has been done – especially for Project Alpha. Definitely making progress on this project and I feel like I’m actually learning much more by focussing on 1 project as well.

So let’s just dive in.

Some great progress has been achieved even though I still think that the speed of content creation should be increased. Some of the things that have been done:

All in all, definitely going in the right direction. The goal for the first months of 2022 is to have 2 articles published every day (except for the weekends) so that would come down to about 60 articles/month. A very ambitious goal and we’ll have to see how long I can actually do that because revenue would really have to go up to be worth investing this much in content creation.

Now, let’s take a look at some numbers:

The guest posts are a mix of links to homepage and inner pages.

Got an increase in rankings. However, I lost a number 1 spot for my (currently) most important keyword that is making probably about 80% of this project’s revenue. It might just be a google dance but I’m definitely going to keep an eye on that.

More important than rankings is obviously the amount of traffic. And november was a bit down compared to October. Definitely not a good thing during the holiday season. But with more content published soon, traffic should go up again.

Despite less traffic, revenue is up because of better conversion rates.

Revenue level is not too bad but to be expected with Black Friday and holiday season to have bit uplift. I expected a bigger increase though to be honest.

Since nothing has been done for this project, I’ll just share the number without any further comments.

Increase in rankings for keywords because of the season that’s starting for this niche. Typically for this kind of websites, when the season starts and some clicks are happening, I believe the CTR is a positive signal to Google which causes the pages to rank for more keywords.

Organic traffic is still up compared to one year ago. However, I don’t expect to see the same spike in traffic for next January like in last January. Last January the spike was a combination of seasonality and ranking for more (important) keywords at the same time.

Finally, revenue is a bit up again but nowhere near the level of the beginning of this year. Compared to last year, revenue is down, despite more traffic. Since I’m focussing on Project Alpha, I’m not going to dedicate any time into investigating this though.

That’s it for this month. Now let’s kick some balls for the last month of the year!